Have you ever had one of those friends? One who keeps you surprised because you never know what to expect, and at the same time you expect them to rise above everything. This is my friend Cheryl, and she sure keeps me laughing.

“You know what I like about you Cheryl? The fact that we can talk about anything!” (Laughter)

This is what I declared last Tuesday night on our way back home from Tillsonburg. We had just finished a lively discussion about the British versus the American way of appropriating countries from Jamaica and the Virgin islands to Hawaii, Alaska and Cuba. In fifteen minutes, ha ha!

Cheryl can also be like a big sister to me, but she doesn’t play that “I’m a few years older” card on me, ever. Two weeks ago we were talking about our relationships with our daughters. We both have three children. I have a son and two daughters; she has a son, only one daughter and a younger son. We have lots in common yet we come from different backgrounds.

The most hilarious thing about her is she is a Minister’s wife. It just makes her huge socially and she has got to be the most diplomatic person I have ever met. She also manages the church choir and is a walking encyclopedia of musical facts. She also has a flare for dressing up to play parts – she owns two tickle trunks!

When I first met her in 2011, it was actually at Sharp Bus Lines. I had just gotten back from attending the Ukulele Ceilidh in Liverpool, Nova Scotia and had come into the office to reclaim my bus keys so I could go back to work on Tuesday. Cheryl was in the office too because, well, first of all she is one of their new driver trainers and secondly she was returning my bus keys because she covered my route for me. She ran around the counter and grabbed me by both arms, looked me strait in the eye and demanded to know where this uke group was. Like an interrogation. She was so excited and couldn’t wait to join.

Turns out Cheryl has been playing the ukulele ever since she heard Peter Gzowski on CBC Radio announce that he could teach anyone to play the ukulele in 10 minutes. When they came back from commercial break she was waiting for her first lesson, borrowed uke in hand. The year she joined our uke group she asked me if I wanted to perform a song with her for the upcoming theme song night, “Show Tunes”. She wanted to do “New York, New York.” (You know, by Sinatra) So we practice it a bit and get it down and she keeps telling me to remember to wear a suit jacket on performance night, etc.  Below is the outcome.

In case you are confused, Cheryl is Liza Minelli. 🙂 I am dressed the way I am because I didn’t understand the assignment! Seriously: I had no idea we could dress up for songs. Ever since then, we have been as thick as thieves. Below are some more pictures of our good times together. Read the captions for a description of the event.

And now, we are starting our own group in Tillsonburg. We are calling it the T’UkeS to stand for the Tillsonburg Uke Society. We are going to occupy a room at the Tillsonburg Station Arts Centre to teach beginners, and hopefully these people will form the basis of a group for us. You just never know!

Onwards and upwards!  Looking forward to this next chapter in both of our lives!

Recently I had to make a big decision. I conferred for many months in fact, with numerous friends (whether they wanted to hear about it or not!) and family members. I came to the best decision for me, which was to leave my parent uke group, Dover Uke Heads. Although I enjoyed my time with them, my friend Cheryl and I wanted to start a ukulele group in the town of Tillsonburg, so that is what we are doing. 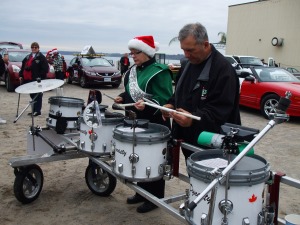 One of the most memorable times with DUH was the Port Dover Santa Claus Parade in November 2013. That year that I had joined the United Drum and Bugle Corps playing snare drum with my sister and my daughter Samantha playing bugle and marching in the corps. Turned out that year both the Drum and Bugle Corps and the DUH were going to be in this local parade. Since our group leader was going to be there on the float with the ukers, I decided to march with the drum corp

About a half hour before the parade starts the officials judge all the floats and the DUH float won “Best Non-Commercial Float”!! When I heard the news I ran over to the DUH’s to celebrate with them. I was so proud of everyone!!! So here I am  dressed to the nines in a bright green marching uniform with white rope epaulets, brass buttons, a silver-sequinned sash and a huge black hat with a big, fluffy green plume, and I’m jumping up and down, whooping and hollering with all these folks in yellow shirts. Ha ha. And afterwards one of the DUH’s said to me, “I know you were in uniform to be with the marching band but I could see that your heart was with us.”

And that sentiment was true for quite a while. I am now moving on to activities that make me happy, that I want to make time for and one of them is starting a new group. Beyond that, I have to point out that I am not a Senior, I work full time, I have 3 children to look after plus a next-husband, my car, yard and household. I can’t dedicate 30 hours a week to something that is supposed to be a hobby. Maybe someday when I am 65 years old and have all the time in the world on my hands, I might be part of a performance group again, but until then my life and my family are going to be my priorities. Of course, there is much more to it than that ~ which remains best unsaid.

I am really looking forward to what the future may bring in a new town, especially meeting new people. We are going to be teaching beginners at the Tillsonburg Senior Centre and eventually growing into a decent group of uke players. I hope you will wish us luck!