The role of mother at Christmas-time has often been overlooked, except in those instances of cooking the meal and baking up a storm. Most of the Christmas tunes are homages to a down-home or country Christmas – or aspects of Christmas, like a tree! And descriptions of the decor and food never acknowledge the person who did all that!

Sometimes mother is mentioned together with father, ie. and mom and dad can hardly wait for school to start again. And also in the song, “I’m Gettin’ Nuttin’ for Christmas” because mommy and daddy are mad.

Heck, even Grandma got her own song!

So today I am posting two seemingly different songs but in each one mother plays the main role.

The first song is a tongue in cheek account of seeing mommy kissing “Santa Claus”, and is a blatant reference to who we all know plays the role of Santa Claus in the household as well.

The second one is about the best mother of all, Jesus’ mother, Mary! There are several songs about Mary. There’s “Mary Did You Know?”, “What Child is This?” etc. 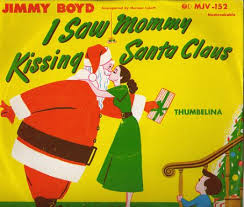 This is what I heard on the radio: the Roman Catholic Church banned this song, or basically condemned it, because it associated kissing with Christmas. And then Jimmy Boyd had to meet with someone high up in the religion to explain the lyrics of his recording to get the ban lifted. I guess this was important back in the day, but I can’t picture Elvis meeting with an Archbishop to apologize for his hip gyrations!

Many artists recorded versions of this song over the years, from the Jackson 5 to Amy Winehouse. So many are worthy of mentioning here but it would be an incredibly long list, so I am just going to say that the rock ‘n’ roll version by John Cougar Mellancamp is probably my favourite.

Jimmy Boyd was a musician at an early age. His grandfather was known as “Fiddler Bill” and their entire family was involved with music, especially since his father, Leslie had over 20 siblings! From the age of 5 Jimmy was taught guitar and harmonica, and by this time Leslie had already removed his wife and children from Mississippi over to California in pursuit of better employment and quality of life. By the time Jimmy was 7 he could perform country songs on stage. At a local country music dance he was discovered by a radio station promoter and was given a slot on Saturday nights, and was also paid $50 a week! Jimmy went on to win talent shows and even landed an audition to perform a comedy skit with Frank Sinatra on his television show. What a remarkably talented young man, who eventually made an appearance on the Ed Sullivan Show, which led to appearing on Perry Como’s show, the Doris Day Show,  the Bing Crosby Show, the Bob Hope Show, and others including American Bandstand. Boyd ended up being signed by Columbia Records, who wanted him to sing pop songs, but his roots were deep in the country genre. By the time he recorded “I Saw Mommy” he was already a seasoned performer!

After experiencing mediocre results with songs by Miller for Columbia for a number of years, Jimmy ended up recording independently with the legendary Percy Faith and had a hit with “Jambalaya”, moved into producing songs for movies where he met, worked with and became friends with Bobby Darin. He was also a dedicated actor and had recurring roles in television series such as My Three Sons. He appeared in numerous Hollywood movies as both a starring and supporting actor and worked with such remarkable artists as Betty White, Rosemary Clooney, Frank Sinatra and Mickey Rooney.

Jimmy Boyd was the youngest person ever to perform on stage as a musical headliner in Las Vegas, often returning to the stage for three or more encores. He also did stand-up comedy to sold-out crowds from the age of 16 onwards. He only just passed away in our century at the age of 70 in 2009. He was known for embracing modernism as well, and his roots in social responsibility ran deep. After being drafted into the army in 1960 but being stationed stateside, he took his own show to Vietnam in 1965 for the USO. He also joined Nancy Sinatra’s USO show trip to South Vietnam to entertain American troops there.

Boney M was a vocal group formed by a German record producer in 1976, of Jamaican-born Liz Mitchell and Marcia Barrett, Maizie Williams from Montserrat, and Bobby Farrell (an exotic dancer) from Aruba. They achieved popularity during the disco era of the late 1970’s, and were known for their rigorous touring appearances in disco’s and clubs, and risqué stage attire. This picture represents their look most accurately at that time.

Their biggest hit came in 1978 with “Rivers of Babylon”, followed by “Rasputin”. Their hit “Mary’s Boy Child” in November of 1978 was the biggest grossing Christmas tune of 1978 in both the UK and the US, and was their most successful hit. Of interest to note: their German producer and c0-song writer was none other than Frank Farian, the notorious singer-song-writer/producer behind the infamous lip-synching duo Milli Vanilli of 80’s. The main singers for the group were Liz and Marcia. In a bizarre twist of legal fate, years after the group disbanded they were each awarded the rights to perform as “Boney M” in a court ruling by a judge. That meant that each member could tour and perform as “Boney M” with group members of their own choosing, and some of them did this late into the 1990’s, even at the same time!

Mary’s Boy Child” is a unique blend of island sound with “Hark, the Herald Angels Sing”, a traditional church hymnal. What I love is how many Caribbean and island nations put their own sound into Christian songs. These songs are almost always very celebratory: happy, positive and uplifting. The original recording was “Mary’s boy Child – O My Lord”, so I am giving that nod to you purists reading this, but at some point the “O My Lord” part was dropped and that’s how I remember it, so that is what you’ll find in my arrangement.

Below the song is a youtube vid of Liz Mitchell performing on stage at a Christmas musical. I don’t know where because the creds are in German.