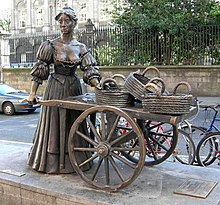 Also known as “Cockles and Mussels”, or “In Dublin’s Fair City”, this popular song is set in Dublin, Ireland, and has become the unofficial anthem of Dublin. The song is sung regularly by fans at soccer and hurling matches, and June 13 has been officially declared Molly Malone Day.

Whether or not Molly ever existed is a long-time debate. The statue of her on lower Grafton Street, erected in 1987, depicts a woman in a 17th century dress wheeling a cart. Though Historians claim she lived in the 1600’s, the song “Cockles and Mussels/Molly Mallone” does not appear in any historic musical record before the 1880’s. She is typically represented as a fishmonger by day and a street-walker by night.

MOLLY MALONE C This version is in the Key of C, developed by our group, T’UkeS.